My New Best Friend in China 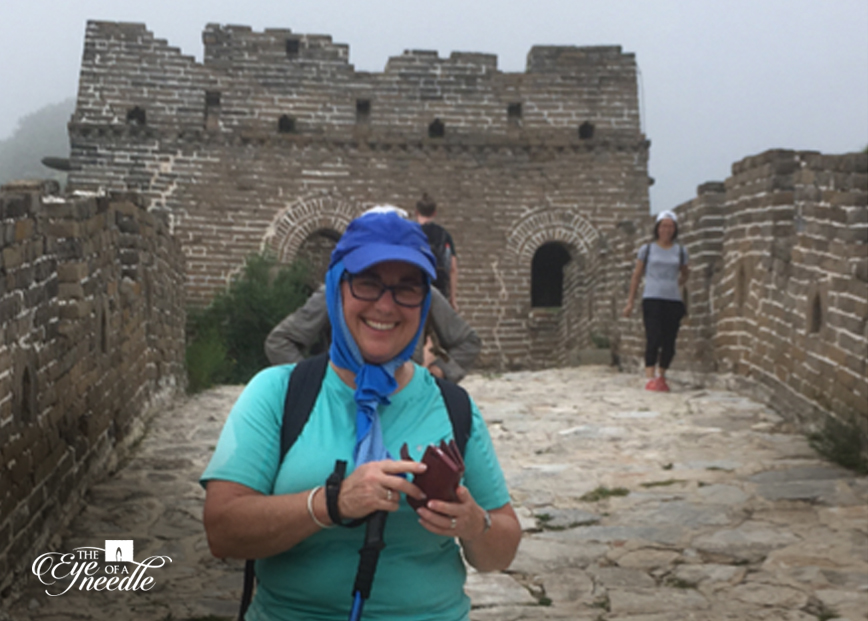 Well we are back in New Zealand, and what a trip! don’t know that I will ever be able to blog about every little experience we had in China, so I’m simply going to write about what comes to mind at any given time. I have to say that every day we had an adventure though and it was like God wanted us to see something new through His eyes each day. He did not disappoint.

Today I’m going to share about my new best friend, who became my constant companion while we travelled. We first met in Hong Kong in our first week, at the Temple Street night markets. If you have been following my FaceBook posts you probably picked up that Asia is very hot at this time of year, and being in a certain phase of my life, at times I found the high temperatures quite overwhelming. In the first few days in Hong Kong, you could feel the humidity building all morning, and usually around lunch time the skies would open and it would pour with rain. One thing we quickly found out was we both needed to have an umbrella at the ready. The locals all walk around with umbrellas. If the sun is out, they walk with the umbrella up to shade their faces; something we were told is a mindset held from way back about keeping one’s skin as porcelain as possible. Where we would use sunblock, they use an umbrella. And when that tropical rain pours, they have their brolly all set to go. We were amused by the downpours; everyone literally stops like a red light while it rains, and as soon as the rain eases, it’s like the green light for life to resume.

Personally I thought having a brolly was great as it was far too hot to be fussing with sticky raincoats. And I am probably a similar height to most Asians, so issues of being poked in the eye with umbrella spokes was not something I had to contend with. There was something a bit weird though about everyone being in their own umbrella ‘space’ that irked us, and most people were completely oblivious to the fact that they might just be slightly annoying the way they held their brollies right at someone else’s eye level!

Other issues with the infamous brolly were experienced as we went through scanning machines – there is at least one X-ray machine at every bus terminal, airport and train station. These were installed apparently as a security measure before the Beijing Olympics in 2008. And did you know umbrellas are considered a terrorist threat – so we learned to have our umbrellas at the front of our packs in case we needed to produce them if questioned. 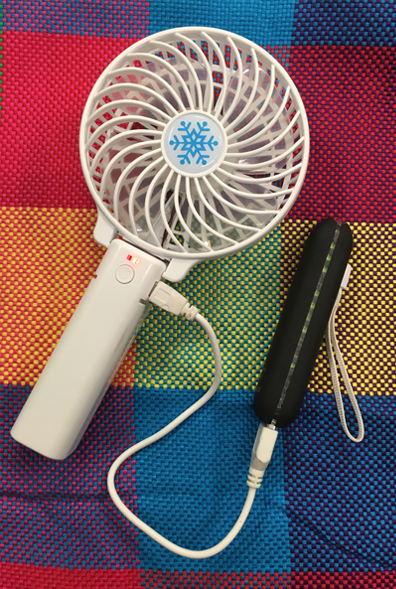 However I digress. The umbrella certainly became a friend, but my best friend was found on day 2 at the market. ‘Fanny’ and I bonded immediately as I traded my sweat for a meagre $5. She had 3 speeds; low, medium and high, and she also had a night light. And the other wonderful feature was that you could charge her up using a portable phone charger! Most days I would take a little portable lithium battery charger in my hand bag, and if the heat got too unbearable and my fan had run out of grunt due to overuse, we would just plug her in and off she would go again to cool me down.

I can honestly say I got past the point of looking stupid, as a lot of people clearly thought I did, but she really was a god send. Some days I got to the point where I just couldn’t even think straight I was so hot and bothered, so it took a few days to admit that the heat was not my friend, but Fanny certainly was!

We did have a chuckle though when we arrived in Beijing. Our English speaking guide there was Leo, and on first introductions he presented us both with another fan each, just like my first one. This meant I was able to have one fan beside the bed, a spare in the back pack, and always one ready to go that was charged up ready to cool me down.

And I haven’t mentioned the walking we did, often in temperatures over 40 degrees. We were told that the Chinese government regulates the temperature app on your cell phone, and won’t let the temp show over 39 degrees or they are obliged to send everyone home from work. So there were days when the temperature was probably closer to 45 according to the locals, so it wasn’t just my thermostat that was slightly wonky. It was damn hot!

I did learn though, how to manage my hot sweats, and I got past the point of worrying that I might look slightly odd. I also invested in a cool cloth at the Stanley Markets in Hong Kong, so I was able to wrap a wet cloth around my neck or under my hat when the going got tough. I realised after a day or two that my cloth actually looked quite a lot like a chux cleaning cloth over my head, but it matched my hat and I really didn’t care. I was cool, calm and collected- as the photos below will show.

We arrived home with only 2 of my new best friends as my original one died when I dropped it. I have already found a home for Fanny II beside my bed, and Fanny III will sit in my office for when those hot flashes try to take me out. I am fore armed and ready.

My only other ‘note-to-self’ is to not travel to China again in July! We know we will be going back regularly on a business basis (more on that in a later post) but we sure picked the hottest month of the year to travel to Asia, and we won’t be doing that again! We will look at Autumn (October/November) or Spring (March/April) for our next visit, which may be sooner than we originally thought. The heat has helped me to form a plan though. Many of the clothes I packed were simply too hot and clingy to wear; I found natural cotton fibres way more comfortable, so made quite a good wardrobe investment there, which I hope to build business from in the future.

We’ve come home to assess the opportunities that have presented themselves to us, so as we debrief and apply for an import licence, things are on track, and we are excited with where The Eye Of A Needle is heading in the future.