A blog from the bullet train 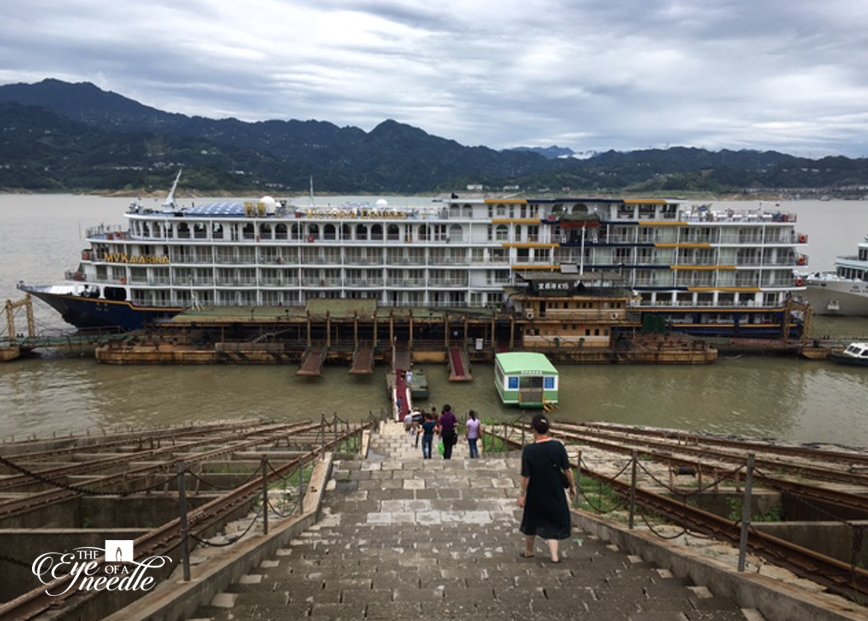 One thing I have learned from all this travelling in China is that some things do get easier. Today our English speaking guide picked us up from our hotel in Pingyao, and we had a short ride to the train station to catch the bullet train to Beijing.

It doesn’t matter where you go on public transport; you have to put all your bags through an Xray machine. The first time this happened to us in China was after we had missed our connecting flight from Shanghai to Yichang, due to air traffic control problems over Shanghai. When flights get cancelled, everything goes in to chaos mode, and it’s very unsettling, especially when it’s not your fault! We arrived in Shanghai at 10:30pm to be told we would need to catch the next scheduled flight to Yichang which wasn’t until the morning, so we had to find somewhere close by to try and catch some sleep in the meantime. On the recommendation of someone at the airport we ended up in a dodgy hotel which was obviously used for some rather dodgy activity. Needless to say, we got no sleep and were up at 4am for a quick shower before getting in to an overpacked free shuttle to the airport to arrive there at 5:30 am when the doors would open. Because the airport had been in shutdown the day before, there were long queues of impatient people this early in the morning. Not something we would like to repeat in a hurry!

We had plenty of time to get things sorted as we needed new boarding passes, but it took forever to find ‘Terminal 1’ which was the domestic terminal. Once we managed to find that, we then had to queue with thousands of others, and we could see time slipping quietly by. In the end we had to push and shove, just like most Chinese people do. Then came bag search number one. The culprits were 2 little portable lithium batteries which I had purposely put in my check-in luggage. There is nothing more humiliating than a security guard rifling through your suitcase looking for said culprit! Anyway, we got through that interrogation, and then at the next security spot it was 2 umbrellas in our hand luggage that caused a hold up. The third time I had a wet cloth in some water that raised some eyebrows, but then we were through and able to find our gate.

Shanghai airport is huge. You can follow an arrow directing you to a particular gate but that gate can be a long way down the hall! As was the case here. We walked and walked and then realized we had better start running as we only had 5 minutes to go before the last call to board our plane. Up & down escalators and around corners, we made it to the gate with 30 seconds to spare. Actually they had already marked us as a ‘no show’ and the last bus to the aircraft was about to leave the terminal. The outside door was locked, so it was a mad dash to stop the bus so we could get on. Phew! It was way too close for comfort!

Once we were on the plane we were able to relax a bit for 2 hours. We hadn’t eaten dinner or breakfast and the flight food was pretty basic; in our scramble we had also not made it to an ATM to get some Chinese cash. We arrived at Yichang unsure if our guide would be there to meet us, as with a missed flight we had gone off the radar and the phone numbers we had been given were actually not the numbers we needed in an emergency.

Being a small provincial airport in Yichang, there was no one who spoke much English. We tried to explain our dilemma that we needed to get to our hotel, but to do that we needed to get a taxi as our private transfer contact had been lost. The taxi driver needed cash before we left, and as fate would have it, the ATM was out of order!

What to do? Fortunately son Willie in Shanghai had by this stage made contact and told us that this would be our initiation to China and it was quite normal to have these complications. In the end the lady who was trying her best to help, took pity on us, and after a ‘We Chat’ conversation in Chinese with Willie’s partner Amelia, said she would give us some of her cash, if Amelia transferred it into her account.

We made the one hour drive to Yichang in the taxi and on arrival at the hotel, asked if we could just have a room for a couple of hours to freshen up before getting a transfer to the bus to our Yangtze River cruise. Communication was difficult and unfortunately lack of sleep and frustration caused this girl to burst in to tears and have a bit of a melt down. Our room had been booked for the previous night but of course we hadn’t turned up and so it was no longer available for us. Somehow, miraculously something shifted, and someone realized we were a bit desperate. We managed to find one right phone number and our guide was contacted. Next thing you know, we are given a room to have a shower; the lovely concierge delivered 6 cupcakes to our room, and our guide arrived to help us get the things we needed – cash – food – and a pharmacy.

From there, things have just got better and better. I have since then only had my big bottle of hairspray confiscated, and a little Kathmandu pocket knife had to be well wrapped up to allow it on the bullet train. We are getting the hang of things now. Umbrellas stay in our check-in luggage, and batteries stay in our carry-on bags. And I have replaced my hair spray with 2 smaller canisters.

I think I can safely say the dramas were worth it. As the old saying goes, ‘Once bitten, twice shy’. We learnt a few things the hard way, and we won’t make the same mistakes twice, so perhaps that security guard did me a favour after all. And looking back, it was wise to have a day up our sleeves for travelling as in cases like ours when we were due to board our ship for the Yangtze River cruise, it only sails on particular days. So everything ended up okay in the end, but it probably was one of the more stressful days I’ve had in the past 5 years!